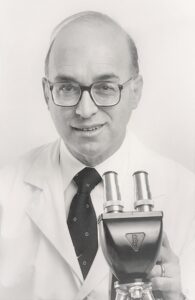 We are all saddened by the recent death of Richard D. Amelar, MD on September 22, 2020, at the age of 93, at his home in New York City surrounded by his family. Dr. Amelar was an early pioneer in utilizing semen analysis and testicular biopsy in evaluating male fertility, mentoring many aspiring physicians and making major contributions in the field.

Richard was an inspirational leader in the field of male reproductive disorders, a pioneer in the earliest forays into the field and a generous supporter of young Andrologists coming into the field. He was my close friend for fifty years.

After completing medical school at New York University in 1950, Richard pursued a residency in Urology at the French Hospital and the Bellevue Medical Center both in New York City; all with the strong support of Dr. Robert Hotchkiss, Director of the Department of Urology. This afforded him the opportunity to work part time at the Margaret Sanger Research Bureau which was the first infertility clinic in the United States; one that actually evaluated both husband and wife together, a novel approach for that time. Dr. John MacLeod, Director of the Sanger Clinic laboratory, schooled in Scotland and a legendary pioneer in the techniques of semen analysis and testicular biopsy, mentored Richard providing him with the diagnostic tools necessary to make further advances in the field.

From 1954 – 1956, Richard, a Captain in the United States Air Force Medical Corps stationed in St John’s, Newfoundland, Canada, served as Chief of the Urology Service in the Northeast Air Command.

He then entered private practice in New York City and later Dr. Larry Dubin joined him. Richard was also active in teaching. He earned positions as Director of the Margaret Sanger Research Bureau Male Infertility Service, Director of the Department of Urology at French Hospital, and Professor of Clinical Urology at New York University School of Medicine.

Despite a robust clinical practice, Dr. Amelar published more than 125 papers and book chapters that spanned several topics. These included: 1) the value of semen analysis; 2) the surgical management of men with obstructive azoospermia; 3) sexual issues that impact male fertility and 4) the negative impact of varicoceles on male fertility and the value of varicocelectomy. Notably, in 1966, he published his first book “Infertility in Men”, later four text books and then along with Dr Larry Dubin developed a classification system of varicoceles.

Dr. Amelar also sought to enlighten the Jewish community about the important relationship between sexual habits and ability to achieve pregnancy as well as ways for Jewish couples to enhance their fertility given some of the constraints imposed by strictly following orthodox Jewish Law.

For this large body of work and dedication to the field of Andrology, Richard Amelar was honored on a number of occasions. These included, among others, the “Bruce Stuart Lectureship from the American Urological Association (1990); the “Distinguished Andrologist Award” (American Society of Andrology, 1999); the Distinguished Service Award” (American Society of Reproductive Medicine, 2002); and the Jerome S. Coles “Distinguished Alumnus Award” (New York University, 2005).

He endeared many of us by his sincere interest in making a special effort to encourage young physicians to learn their craft well, to facilitate invitations to speak at scientific forums to enhance their visibility, and was never reluctant to refer his patients for a second opinion. These actions, along with the remarkable compassion he showed to his patients, are the wonderful and endearing traits of an accomplished and confident physician.

As young physicians emerged in the field of Andrology, he gave a unique silver sperm lapel-pin as a mark of distinction; an “Amelar Club” of sorts, that many of us share and appreciate on a very personal level.

He is survived by his wife of 67 years, Alice; three daughters, Jessica Amelar, Sarah Amelar, and Susanna Lodge; and three grandchildren Joseph, Hannah and Sam.

Richard Amelar was a wonderful, compassionate physician, inspiring mentor and dear friend. We will all miss him.